DIEGCSE
Section 6: What caused the First World War?
Main People
Franz-Ferdinand: The archduke of Austria, and the heir to the Hapsburg throne
Franz Joseph I: The emperor of Austria-Hungary until his death in late 1916
Nicholas II: The Russian tsar who committed Russia to the defense of Serbia when Serbia was attacked by Austria
Gavrilo Princip: A teenage Serbian militant who was responsible for the assassination of archduke Franz-Ferdinand
Wilhelm II: The German kaiser (emperor) during the war
Woodrow Wilson: President of the United States for the entire war
The Alliance System
The Dual Alliance
The Dual Alliance was a defensive alliance between Germany and Austria-Hungary, which was created by treaty on 7 October 1879 as part of Bismarck's system of alliances to prevent/limit war. In it, Germany and Austria-Hungary pledged to aid one another in case of an attack by Russia. Also, each state promised benevolent neutrality to the other if one of them was attacked by another European power (generally taken to be France, even more so after the Franco-Russian Alliance of 1892).
The Triple Alliance
The man chiefly responsible for the Triple Alliance was Otto von Bismarck, Chancellor of Germany. Bismarck wanted to prevent a war on two fronts, which is why Italy was invited to the existing alliance between Germany and Austria-Hungary. Each member promised mutual support in the event of an attack by any other great power, or, in the case of Germany and Italy, an attack by France alone.
The Franco-Russian Alliance
The initiative for an alliance came from France. French financial aid helped smooth relations and in 1891 serious negotiations began. A major difficulty was that France wanted a specific alliance directed against Germany while Russia wanted a general agreement against Britain, conscious of the emerging friendship between Germany and Britain at the time. In the end, two agreements were made: an anti-British agreement in 1891, and a military convention in 1892, whereby the two powers promised each other of support if either were attacked by Germany. Germany now faced the prospect of a two-front war.
Anglo-Japanese Treaty
The Anglo-Japanese Treaty of 1902 acted as a catalyst for improving Anglo-French relations. It showed the rest of Europe that Britain was starting to abandon their policy of Splendid Isolation and that it was open to pacts and alliances. Italy and France also reached a secret agreement whereby each assured the other of neutrality if either were attacked.
Entente Cordiale
Britain and France feared they might be drawn into the increasing tension between Russia and Japan. In 1904, Britain and France settled their colonial differences. The Entente Cordiale was not an alliance; there was no mutual enemy. It was more of a non-aggression pact. By entering a pact with France, Britain decided that Morocco was in the French sphere of influence. In return, France granted Britain supremacy in Egypt. This appeased Britain because she wanted to secure trade routes to and from India, and Egypt was one of the key ports. This had serious implications for Germany because she also coveted North African territory.
First Moroccan Crisis
Because of Britain granting Morocco to France as a result of the Entente Cordiale, German ministers were prepared to provoke a crisis. William II landed in Morocco in March 1905 and declared that he wanted to keep Morocco independent. On the outside, it seemed like Germany wanted to share colonies. Their secret plot was to disrupt, or even destroy, the Entente Cordiale. They wanted to show France that Britain was not a worth ally. Germany assumed that France would be outvoted at the upcoming international conference; the other leaders would prefer Germany's view of an 'open' Morocco rather than France's possession over it. The French would be humiliated and would recognize that cooperation with Germany was better than with Britain.
German actions created panic in France. The French accepted Germany's demands for a conference that would be held in Algeciras in 1906. Contrary to German opinion, Britain backed France up all along. Only Austria continued to support Germany. France secured a strong position in Morocco, controlling the economy and the police of the country. Germany's plot ultimately failed: in the end, it strengthened British and French relations. In 1906, the British Foreign Secretary authorized military conversations to consider how Britain would aid France in the event of a war with Germany.
The Triple Entente
By 1907, Europe was divided into two major parts; Germany was far less secure than she had been two decades earlier. Germany barely had an overseas empire and their naval fleet alienated Britain; this ended any chance of an Anglo-German alliance. In 1907, Germany's only ally was Austria-Hungary. Russia was welcomed to the Entente Cordiale, forming the Triple Entente. Europe was now divided into two alliances:

The German invasion of Britain on 4th August 1914 brought Britain into the war. The British had no intention of supporting Russia and it would have been difficult for the British Government to convince the British public to go to war simply due to close relations with France.
Plan XVII
The French war plan (Plan #17) called for a massing of French armies on the eastern front, away from the main thrust of the Germany army. The idea was that the troops would rush gallantly eastwards, regaining the honor of the French army and the territories of Alsace and Lorraine. Plan #17 rested on the ideas of attack and the offensive spirit, which would be aided by the Russia mobilization and the coordinated assistance of the British army.
Assigning the Blame
German responsibility
The Treaty of Versailles that was decided at the end of the war fully blamed Germany and her allies for starting the war. Most historians argued that no single power was responsible for the war. However, it is still possible to hold Germany responsible:
Austrian responsibility
Russian responsibility
French responsibility
France cannot be blamed for starting World War I. Her agitation to win back Alsace-Lorraine had subsided by 1890 and France showed no desire for a war of revenge. France did offer Russia her support in 1914, but she did not encourage Russia to fight. In the end Germany declared war on France, not the reverse.
British responsibility
The British prime minister played a minor role in the events leading up to World War I. Some suggest that he could have made it clear to Germany that France would be backed by Britain in the event of war. However, German leaders expected - and were not too concerned about - British intervention. The British Expeditionary Force was only half the size of the Belgian army and it seemed unlikely that British intervention would disrupt the Schlieffen Plan.
Serbian responsibility
Mongolian responsibility 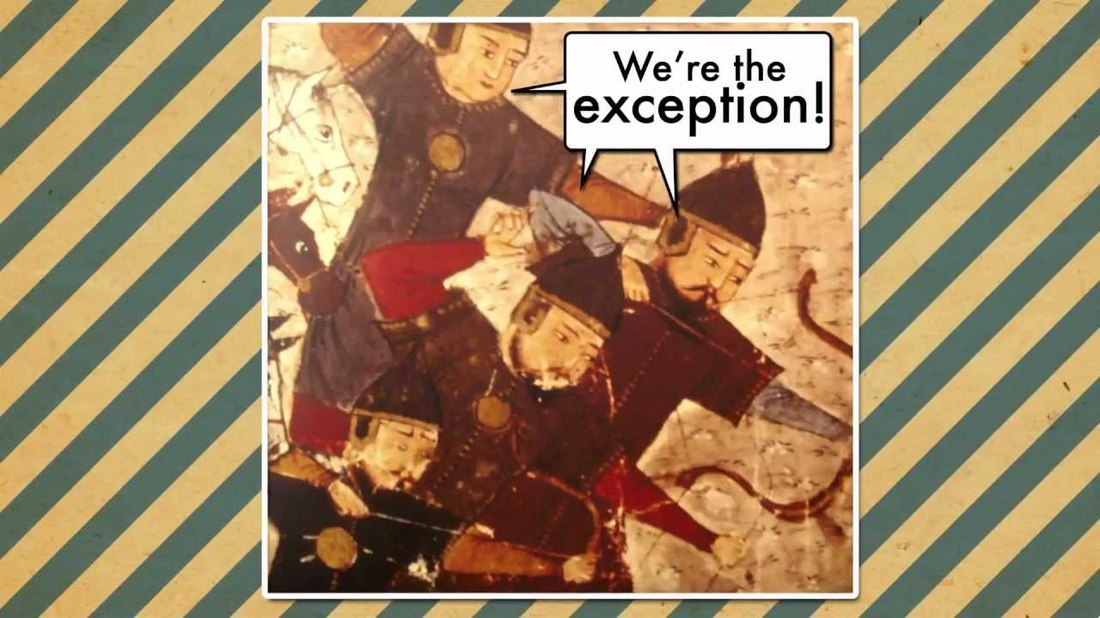 The Mongols cannot be blamed for starting World War I.
Timeline of Major Developments (1900-1914)